Repetition is the mother of wisdom, so at the beginning of this year’s paragliding season, we will remember in what space we move with our glider.

When a person unknowing the beauty of paragliding looks up at the sky, he probably thinks he doesn’t care who he flies. But the opposite is true. We have divided the airspace into several categories that have different restrictions or even bans.

The International Civil Aviation Organization (ICAO) has defined a total of 7 types of airspace, which we will discuss in this article.

Controlled airspace extending upwards from a specified height above the ground.

Controlled airspace, extending from the ground surface to a specified height

A defined part of airspace, normally under the jurisdiction of one aviation component, which by mutual agreement is temporarily reserved for the exclusive use of another aviation component and through which no other traffic will be permitted to pass.

Airspace of specified dimensions, which serves to protect airport traffic.

Method of flight control, enabling flight in suitable meteorological conditions. In such a flight, the pilot controls and navigates the aircraft according to the view from the cabin.

A method of flight management that allows flight even in worsening weather conditions when the weather does not allow VFR flight. During such a flight, the pilot controls the aircraft on the basis of data from the instruments.

The NOTAM is issued as a warning of danger or to inform pilots of changes in air traffic. Their duration may be limited to a few hours / days.

When taking off, approaching and landing, and flying below the altitude, the distance from the ground to the pilot is important. Therefore, he sets the altitude pressure QNH on the altimeter, which is handed over to the ATC unit. For activities around the airport. Regional QNH is used for flights between airports.

And let’s see what spaces we have in the Czech Republic. 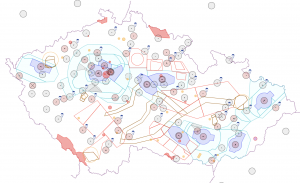 The part of the airspace from the ground in which the flight must not take place. These spaces can be found here, for example, above the Prague Castle or the Temelín Nuclear Power Station.

Airspace of defined dimensions, above land or territorial waters of a State in which the aircraft is restricted in accordance with established conditions. This space can be flown, but only if certain conditions are met. These spaces can be found above National Parks.

Airspace of defined dimensions within which activities dangerous to the flight of an aircraft may take place at a particular time. Flying through this area is not prohibited, but is not recommended. In these areas, for example, ammunition is disposed of, or there are gas reservoirs. These spaces can be found in Dolní Dunajovice, where the largest gas reservoir in the Czech Republic is located.

It ranges from ground to 300 m AGL outside CTR controlled airports. In addition to the above conditions, VMC minima are set – min. visibility 1500 m (helicopters 800 m), maintaining the ratio of speed and visibility 100: 1 (fly max. 100 km / h in flight visibility of 1 km), outside the cloud in the visibility of the ground.

It ranges from FL 95 to FL 660 inclusive, TMA Prague outside the TMA of other controlled airports. Minima VMC are the same as in class E, from FL 100 above the required visibility rises to 8 km.